Beyond Scared: A Spirited Mom Fights Back 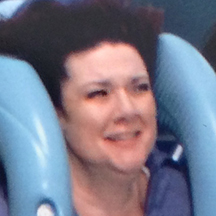 As Melanoma Awareness Month continues, so does the Coolibar Melanoma Survivor Series. This week: Georgina Kerstin of Naperville, Illinois.

Georgina Kerstin first felt the itch on her right calf in late spring, 2006. The source was a mole just below the knee. At the time, she was a busy mother of two – maybe a little too busy, a “doer” mom with a lively spark that made her ambitions slightly bigger than her calendar. She did not get to the doctor for a biopsy until July.

“When the call came and I heard the words, ‘you have melanoma,’ I didn’t know what life had in store for me,” she says. “Until you hear those words, you don’t understand. My doctor proceeded to tell me she already scheduled an appointment with the ‘melanoma doc’ in Chicago.

“I was beyond scared.”

The first surgery was scheduled at the beginning of August. Georgina was diagnosed with early Stage III melanoma; microscopic metastasis was found in her sentinel lymph node. Two weeks after the first surgery came another, a right thigh dissection that removed 13 more lymph nodes.

“By the grace of God, all of those lymph nodes were clean,” Georgina says.

The doctor told her that her only option was to undergo high-dose interferon treatments for one year. Melanoma survivors 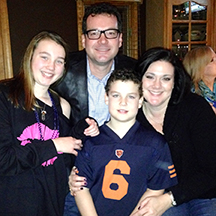 know that this treatment tends to me tough on the body, But for Georgina, it would afford a seven percent better chance against recurrence.

“That is not a large number to be sick while on treatment for one year,” Georgina says today. “I thought, okay, I can handle this, but this is a year.  Do I do this? Do I not do this? What if I don’t do it and the melanoma comes back? I’m gonna kick myself. What if I don’t do this and I end up dying?”

These were just the surface thoughts. The kids were 18 months and four and a half years old. Georgina’s job as a mother had just begun. Her schedule was very busy and active as a stay-at-home mom. Her husband struggled with the diagnosis as well – he had trouble with Georgina being sick at all. It was, to understate it greatly, a very difficult time.

The final choice: no interferon. “I just refused to let it beat me,” Georgina says. “This is my game, and I will win. You have an 18-month-old and a four-year-old and you have no other choice.”

Instead, Georgina revamped her life – backward and forward. “This whole thing taught me how to be more in tune with my body,” she says. “I look back and go, ‘yeah, I had two young kids, I was run down, I was sleep deprived.’ And that’s how the melanoma had its way with my body. Because I was not taking care of myself.”

Yoga was “the best decision ever,” she says, to remain healthy in mind, body and spirit. She’s also lost 30 pounds, and kept it off.

The biggest change: her attitude about life and people. “I don’t have a filter anymore,” Georgina says. “I’ve learned about not having a problem with, if there’s a negative person in my life, to just cut them out. I am honest. I say the truth because I don’t have time for anything else.

“I am the bouncer from hell. This is my party, and this is my body, and melanoma is not welcome.”

True to form, Georgina pulls very few punches about melanoma and the rest of the world. “You can blame the media because of what they’re portraying – what we’re supposed to look like,” she says, “even though a lot of them get their spray tans. People say, ‘I have to get a tan, I have to fit a certain mold.’ And those of us who have had this battle, we’ve learned our lesson. Because in the ‘80s all I did was lay out and fry myself. And here I am.

“And I guess because of my life experience with the melanoma I’m like ‘whatever.’ I just do my own thing. I just want to have a nice peaceful life. I want to have balance and raise my kids to be good citizens. I want to live my life and enjoy it to the fullest.” 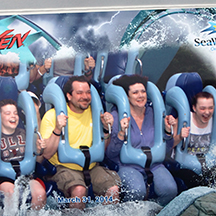 Georgina says her long-term goal is to educate friends, family and community on sun safety, and raise funds for research to further treatment options for melanoma patients. “I want to use my experience to show people how the sun rays are dangerous and melanoma is preventable with simple precautions,” she says. “I also have plans to have my own foundation someday, Mommies Against Melanoma, and would like to educate the children in our community on sun safety.

Georgina remains a spirited, busy mom – the spark is still there, but it’s balanced by a certain grace. Her children are nine and 12 years old now, and they are still her focus. She’s a volunteer at the local elementary school as the president of the Home and School Association.

She has also remained NED (no evidence of disease). In August, she will be eight years NED. “Until you hear those words I will still have anxiety,” she says. “You don’t count yourself eight years until it’s actually eight years. I don’t take anything for granted. I know what the disease is capable of doing.”